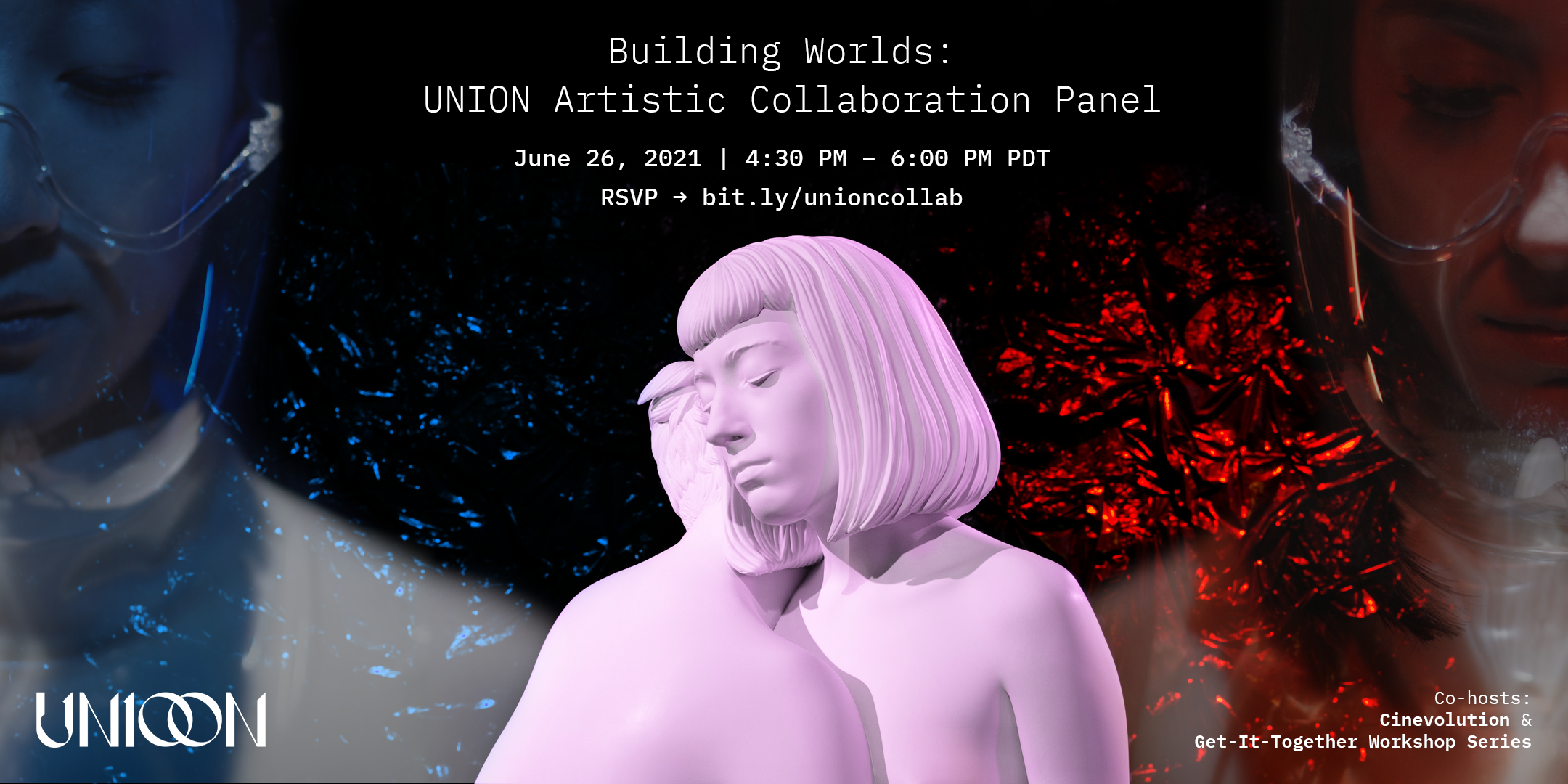 Join us for an interactive panel with the artistic collaborators behind UNION! Featuring 6 collaborators who contributed to sound design, musical composition, visual world-building, and sculpture, the conversation will spotlight the mediums involved in the making of UNION, as well as the process of collaborating while navigating pandemic limitations.

Speakers will share behind-the-scenes details from the creative process and discuss their contributions to the conceptual development of the exhibition. Co-creators Nancy Lee and Kiran Bhumber will be in attendance as active audience members.

This event is co-presented with Get-It-Together Workshops and made possible with support from City of Vancouver Cultural Services, Creative BC and the Province of British Columbia.

Accessibility: ASL interpretation, descriptive language, and automated captions in English will be provided throughout the event. A recording will be made available post-event.

Jen Sungshine [she/her] is a queer Taiwanese-Canadian interdisciplinary artist/activist, community facilitator, and cultural producer based in Vancouver, BC. She is the Co-Artistic Director and Co-founder of Love Intersections, a media arts collective producing intergenerational + intersectional QTBIPOC stories through documentary film. She currently serves on the board of the Vancouver Artists Labour Union Cooperative (VALU CO-OP) with a mission to transform labour practices within the arts and cultural sector.

Adam-Lin Bungag (aka. NOTDEADYET) [he/him]. NOT DEAD YET is a Vancouver-based experimental unisex apparel line designed by adam-lin bungag that aims to deconstruct and divulge the unspoken narratives of finding identity in relation to the constructs of masculinity, femininity, and sexuality.

Aleksandar Zecevic [he/him]. Upon completing a music conservatory and technical college, Aleksandar Zecevic started his career in sound design in 1986. As a Sound Engineer, Audio Designer, Sound Artist and Electroacoustic Composer, Aleksandar worked on numerous Radiophonic, Film, Theater and multimedia projects. From 1998 until 2018, he was Artistic and Technical Senior Sound Artist and Director for Interactive Audio in Electronic Arts Canada. As of 2019, Aleksandar Is working as an independent Sound designer – Interactive Audio Specialist based in New Westminster, BC.

Conner Singh VanderBeek [he/him] is a composer, media artist and Ph.D. candidate in ethnomusicology based between the University of Michigan and Vancouver, BC. He works on musical expressions of Canadian Punjabis and how, whether they create for their diasporic community or for the cultural mainstream, their work is always viewed through their racialization. As a musician, he specializes in classical and jazz piano with forays into Indian classical and Sikh devotional musics, Javanese gamelan, and noise.

Ian Nakamoto [he/him] is a Japanese-Canadian sculptor, researcher, and art fabricator from Richmond, BC. Trained as a monumental sculptor and animator, his practice focuses on exploring new ways of producing traditional figurative sculpture with emerging technology, with a focus on 3D scanning and 3D printing. He is currently the creative director at Forge Labs, where he works as a consultant and digital sculptor on fine art projects, film props, and archaeological reconstructions.

Rio Quann [she/her]. Originally from Edmonton, Rio Quann is a Vancouver-based production designer/art director for film, commercials, music videos and editorials. Additionally, Rio has helped produce and design a multitude of events around the city of Vancouver including Public Disco, Vancouver Mural Festival, and Vancouver Pride Society. Rio has a Bachelor of Design from the University of Alberta, with continued studies in Interior Design from the Visual College of Art and Design in Vancouver. She resides in East Vancouver, where she enjoys playing music, making art and running her online vintage shop Muse.